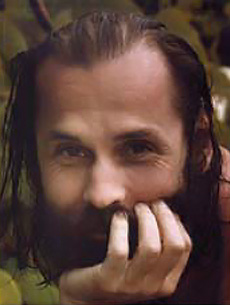 Juliu Horvath was born in Romania, where even as a child his love for movement was appparent through his success in various sports including swimming, gymnastics and rowing.

At the late age of 19 he started studying classical dance, and soon went on to become princpal dancer with the Romanian National Ballet Company.

In 1970, while on tour in Italy, he defected and stayed in a refugee camp until receiving political asylum to the United States. He then moved to New York, taking on various jobs until he was noticed, and hired, by the New York City Opera. During this time he also toured with international stars such as Margot Fonteyn, Jacques d’ Amboise and Melissa Hayden, before moving on as principal dancer with the Houston Ballet. It was here that he ruptured his achilles tendon bringing his dancing career to an end.

Turning his focus to the study and practice of yoga, he moved in 1977 to the Virgin Island of St. Thomas. During this period on the island, he discovered the inner workings of the body and developed a movement system that he called “Yoga for Dancers”. This original system went on to serve as the deeper and more advanced origin for what we now know as GYROKINESIS® Methodology.

Juliu returned to New York in the early 1980’s where he began teaching his unique method, and then later opened the successful White Cloud Studio. It was here that he continued to develop his method, putting his creative energy into building a machine that would enhance and give assisted understanding to his work. This lead to the GYROTONIC EXPANSION SYSTEM®, adding another dimension to his continuously evolving method.

Juliu continues to create and teach GYROTONIC® and GYROKINESIS® training courses worldwide, enabling people of all ages and states of health to benefit from his method.

GYROTONIC®, GYROKINESIS® and GYROTONIC EXPANSION SYSTEM® are registered trademarks of Gyrotonic Sales Corp and are used with their permission.